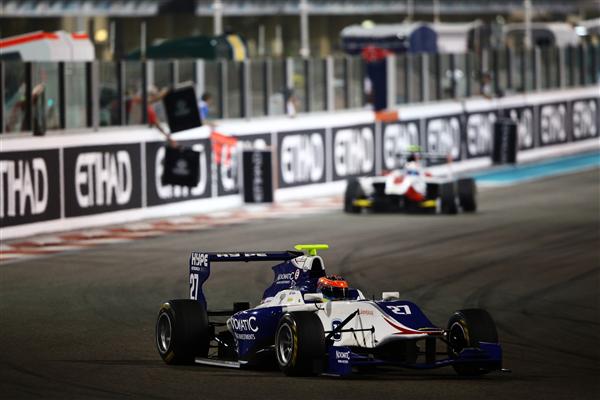 The 23 year old started the day on a positive note by putting his Koiranen GP3 Dallara on the fifth row of the competitive grid during morning qualifying with a time of 1;56.560, which even saw him sit in fourth place for part of the forty-five minute session.

But it was however during the evening race set under the stunning Yas Marina floodlights where Stoneman caught the attention of motorsport’s elite.

As the red start lights went out Stoneman got off to a steady start and by half way through the first lap had gained a place to eighth.   As a leading group of ten cars began to pull away from the rest of the field it was the 2010 F2 Champion who looked likely to make up even more places.    Stoneman continued to push and did well to avoid a couple of accidents mid way though the race.   These didn’t distract the Hampshire driver as he set about securing a very impressive sixth place in his single seater return.

Stoneman was very satisfied with his race.  “ I have to say I’m happy with sixth.    I have only had practice yesterday and qualifying session this morning before the race to get to understand something about the car.  It felt good to be back on “home ground” both in the car and at this great circuit, which I really like.    The start was OK, but I just wanted to make as much ground from my grid position, which I did.  Tomorrow is going to be tougher as track temperature the midday race is going to be hot which may affect the feel of the car gain.   Either way, this weekend is going well and I would like to thank the Koirenan team for going a great job with my car.   We have had so little time together to get it right. ”

Stoneman’s results have not gone unnoticed and the BRDC SuperStar received plenty of praise when he later visited the F1 paddock to catch up with some of the teams and personnel.

Race two of the GP3 programme for this weekend starts at Sunday 12:00 local time and 08;00 GMT.     Stoneman will start from the second row of the grid in third thanks to the GP3 reverse grid format.