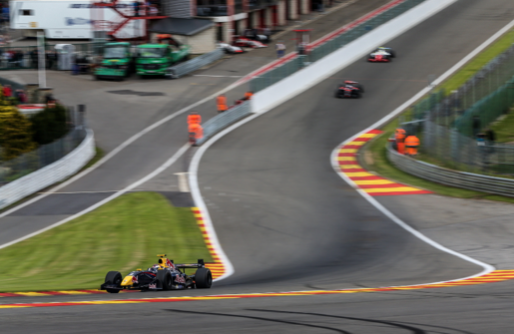 Saturday, 30th May 2015 Spa Belgium. Dean Stoneman made it a hat-trick of podiums in Renault World Series 3.5 with a storming drive to finish 3rd in race one in Spa.

The Red Bull Junior driver qualified on the third row of the grid and was looking to build on his impressive 2nd place last weekend in Monaco.

As the lights went out Stoneman made a strong start, moving up to fifth as the leading group swept through Eau Rouge for the first time.   The DAMS driver was then on a charge and found himself in a three-car battle for fourth.   On the following lap it was Stoneman who made one of the overtaking moves of the season through the formidable Eau Rouge to move up to 4th.

The 24 year-old then began to close the gap to 3rd and on lap four tried to capitalize on a battle ahead for second with Stoneman moving alongside both cars, but Stoneman was unable to make the move stick on that occasion, but just one lap later the charging Red Bull driver did eventually move into 3rd with another dynamic pass.

Despite some pressure towards the end of the forty minute plus one lap race, Stoneman secured another podium place and with it a further Rookie of the Day trophy which was presented to him Torro Rosso F1 driver Max Verstappen.

Stoneman commented on his third podium at three races “ I’m pretty happy to get on the podium again, especially from 6th.  I enjoyed the race and was pleased with quality of driving out there which allowed me pull off a couple of high speed overtaking moves through Eau Rouge.  I hope I can build on this for tomorrow’s race and push for a win.”