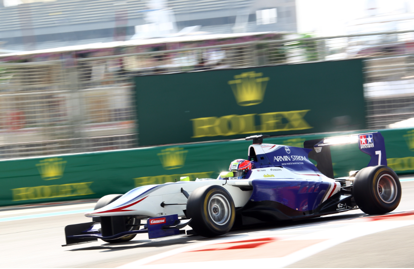 Starting from the front row of the grid in second place, Stoneman made a blistering start to power in front of the pole sitter who swerved toward the Koiranen driver. Stoneman defended his position well as he lead into turn one. From there, Stoneman produced a classy performance to open up a 2.1 second lead over the second place Kirchofer.

The Southampton based driver then continued to dominate the race and produced a fastest lap of 1:57.92 on lap 10. The 24 year olds lead was never really under threat despite a third-lap safety car and the loss of a mirror. This was truly a peerless performance that confirms his status as one the hottest talents in single-seater racing.

Although the race looked straight forward, Stoneman explained his in-car battle with the high track temperatures. “ I got a great start but could see Kirchofer coming alongside me. I was able to hold my position into turn one but it wasn’t easy. Throughout the race I had to really battle with the heat; it very was hot. At one point I had sweat just pouring down my face and into my eyes.” He added, “I then lost my right mirror which made it hard to judge reference points on the track. He (Kirchofer) was keeping me honest for most of the race. He is quick driver and I’m battling with him for championship places so I’m pleased to have got the win today.”

Yas Marina is a key circuit for Stoneman. In 2013 he made his return to single seater racing here and secured an emotional podium. The circuit is also where he successfully tested with the Williams F1 Team in 2010 before being diagnosed with testicular cancer.

Stoneman is now in second place the 2014 GP3 Series championship with just one race remaining.

Due to reverse grid format, Stoneman will start from 8th place on Sunday from where he will hope to get on the podium once again.