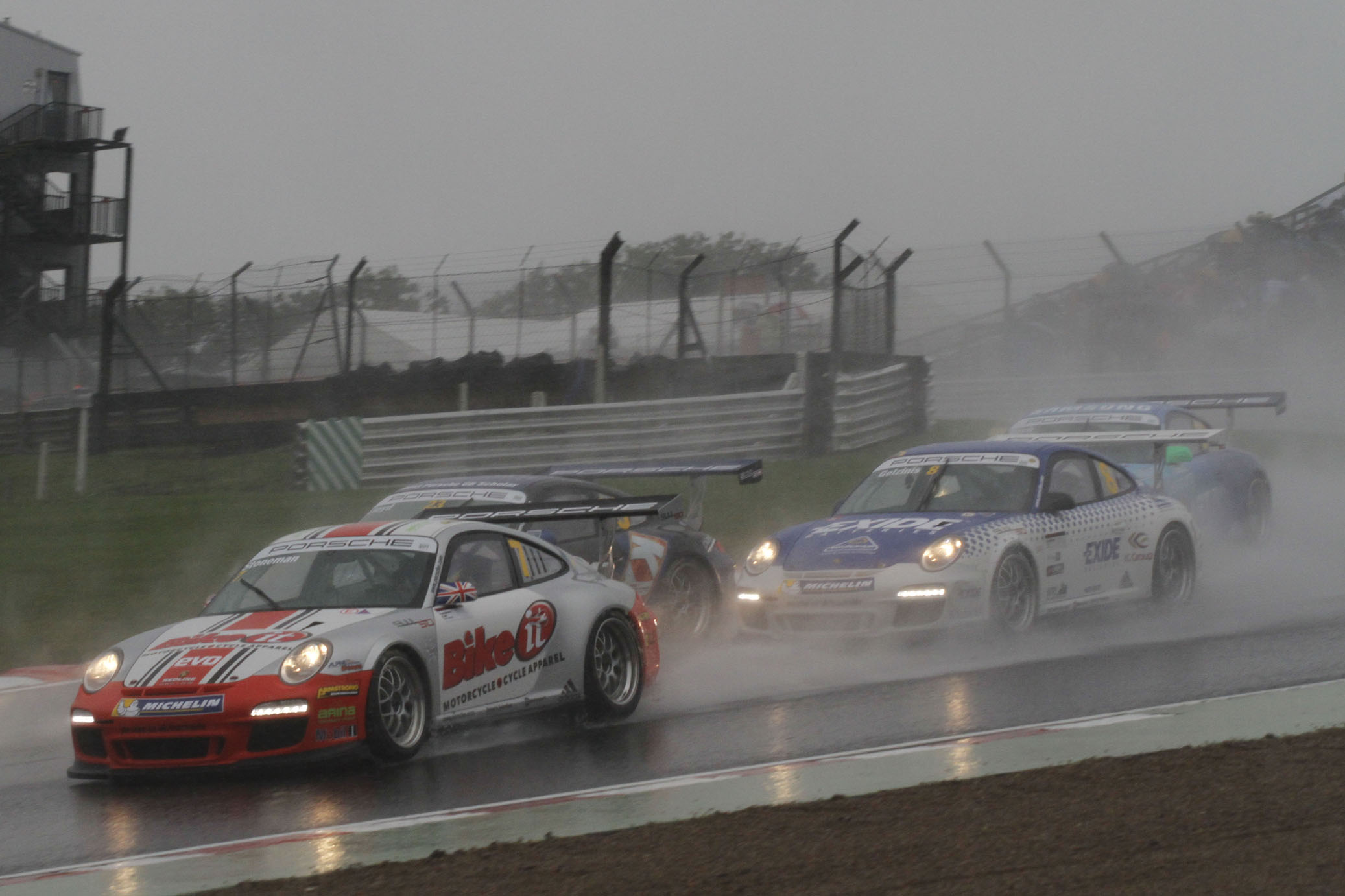 Brands Hatch, Kent. UK, Sunday, 13th October 2013. Dean Stoneman finished the season just as he started it; with stunning win at a soaking wet Brands Hatch for round 20 of the Porsche Carrera Cup GB.

Racing in unrelenting rain, the Southampton drove one of his best races of the season to secure his fifth victory in his come back year to full time motorsport.

Having had a disappointing qualifying session the day before the 23-year made one of his trademark rapid starts form the second row of the grid. As they entered turn one at Paddock Hill Stoneman was pushing for second place, which we has able to just grab as the lead cars headed up the hill to Druids hairpin corner. In slippery conditions, Stoneman gave a masterclass in wet weather racing as he began his quest for the lead whilst fending off the attentions of the third place car. The leading group was closed up when on lap 7 the Safety Car was deployed due to an incident further back in the field. This allowed the BRDC SuperStar to poise himself and think about the final few laps.

As the safety car went in, Stoneman managed to get closer to his target as the two leading cars peeled away from the pack of Porsche’s behind.

Stoneman gradually closed the gap and saved the best until the last lap when he honed in on the leader as they approached Druids. Moving left then right he created a gap and dived down the inside of the hairpin corner. Despite the other car turning in and making contact with the Bike It Porsche, Stoneman managed to take the lead and finished the race once again the victor at the famous Kent circuit.

Stoneman was ecstatic with his win. “Superb that is one of my best victories of the season. I love this circuit and enjoyed racing in the rain. I got a great start and managed to get from fourth up to second. I always thought Lloyd (race leader) could be caught, but as the race went on I wasn’t sure if I had enough time. Then on the last lap I found myself right behind him. He made an error exiting Paddock Hill and I wanted to get the win so much so a got along side him as we entered Druids. He turned in on me but I still managed to get past him. Its great to come back to Brands and get another win here as I did back in March and finish on a high.”

Redline Racing Team boss Simon Leonard: “Dean was amazing. There are few better than him on his day. In the wet he is a very good driver. He drove the wheels of that car today. We have enjoyed working with him this year”.

Dean finished the season fifth in the Porsche Carrera Cup GB championship securing five wins and marking his return to racing with a very impressive set of results.