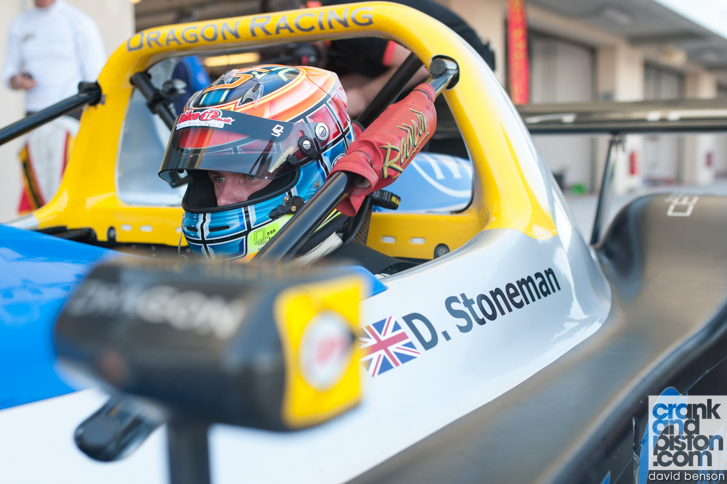 Racing in the SR8 Radical on his own for Dubai based Dragon Racing, Stoneman produced a flawless display in qualifying and both races in a series designed to prepare him for his forthcoming return to single-seater action at Yas Marina in GP3 for the F1 support race in early November.

The 23 year old’s day started well in the morning qualifying session which saw him setting a new lap record for Radical’s with a time of 2:07.434 some two seconds quicker than the existing record.

From there it was plain sailing for the Southampton driver.   Race one saw him open up a substantial lead from the rolling start, which was never really threatened throughout the forty-five minute race.  This was despite having to suffer a ten second extra waiting period during his pit stop due to being a pro driver racing on his own with no co driver change required.

Race two was a similar story with Stoneman in peerless form.   Another lights to flag victory saw Stoneman complete the perfect day of racing who crossed the line nearly forty seconds ahead the second placed car.

Stoneman was satisfied with his performance. “We came here to prepare for the GP3 race and testing and it has gone really well.  I have to say a big thank you to Dragon Racing who have been great.   I have been very impressed with their approach to racing and they gave me a great car.”  He added, “ I really like Yas Marina as it is a special place for me.  Racing out here is fun and very enjoyable and this one off couple of races has given me some great prep for GP3.

The BRDC Superstar will now turn his attentions to the GP race at Yas Marina 2-3 November which will see the 2010 F2 Champion return to single seater action for the first time for 3 years.