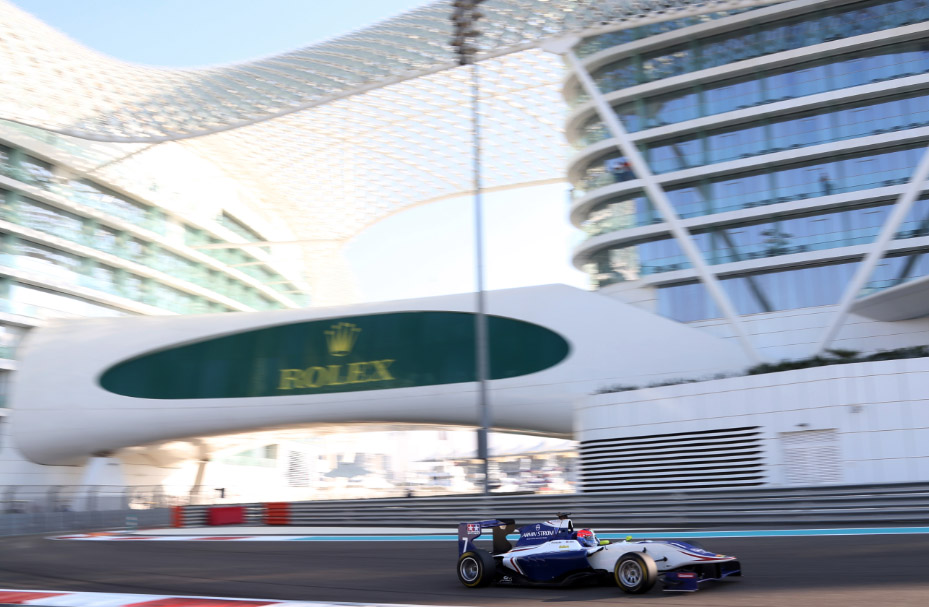 GP3 Round 9, Race 2 Yas Marina, Abu Dhabi, 23rd November 2014. Dean Stoneman secured the championship runner up spot, despite having to retire on the opening lap of the final race of the season.

Starting from the fourth row of reversed grid following his empathic victory in race one, the Brit sustained terminal damage to the rear of his Dallara whilst moving up to sixth place after another great start.

From there it was a nail biting race as Dean and his team watched to see if Marvin Kirchofer, the only other driver who could challenge the 24-year old for second place in the championship standings, could finish sixth or higher. With 163 points versus 161 it was going to be close. But as the race finished, it was smiles all round as the German finished just 12th that meant Stoneman hung on to his well-deserved runner up place.

Stoneman reflected on his afternoon: “ I made a good start and was starting to make up places. Half way through the opening lap I felt an impact at the rear and could see the rear wing was damaged and had collapsed. There was no use trying to fix it as it would take too long; so it was race over.” About the Championship: “I’m delighted to finish the season as championship runner-up. This has been my first full season back in international single seaters and it’s been tough at times including having to change teams. I have to thank Koiranen GP, they have been superb and have given me a great car which has allowed me to have a strong end to the season. We now need to see what I will move on to next year. ”

Stoneman also finished the season as the driver with the greatest tally of victories. The Southampton driver enjoyed wins in Barcelona, Spa, Monza, Sochi and Abu Dhabi.

Stoneman will stay on at Yas Marina for three days of GP3 testing with the Koiranen GP team as he weighs up his options for 2015.