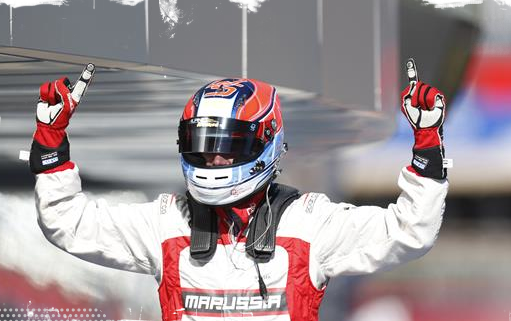 Stoneman adapted well to the brand new Sochi circuit having put his new Koiranen GP3 car on pole earlier in the day by over half a second. Lining up on the front row of the grid in the bright Russian sunshine Stoneman made and emphatic start and lead into the first corner whilst the busy pack battled for position behind the rapid Brit.

From there the Southampton based driver was in complete control and was never challenged for his lead as he seemed grew in speed and confidence as the 15-lap race unfolded. Receipts of his pace came in the form of fastest laps; first on lap 10 and then the fastest lap of the race: 1:53.889, which was posted on the final lap. Proof that Stoneman was in no mood to slow down.

A jubilant Stoneman was delighted with the race. “ I’m so happy with this today. To come here for the first time with a new team and win at the first ever Russian GP3 race is very satisfying. I have to thank Koiranen they have been amazing.”

About the race he explained: “ I got a great start. The car is the best GP3 car I have ever driven. I still feel there is more to come if we had more time to set it up. It was also great to get the fastest lap. I radioed the team to ask them if I had secured it with two laps to go. When I heard I hadn’t, so I then made a big push and was pleased to secure it. It really completes a great day.”

Stoneman will now turn his attentions to race 2 tomorrow. Due to the reverse grid structure he will start from the fourth row of the grid from where he hopes to have another strong race.

Race two starts tomorrow at 08:00 GMT and can be seen live on Sky Sports F1 channel.