Stoneman Closes in on Title with Another Lights Podium 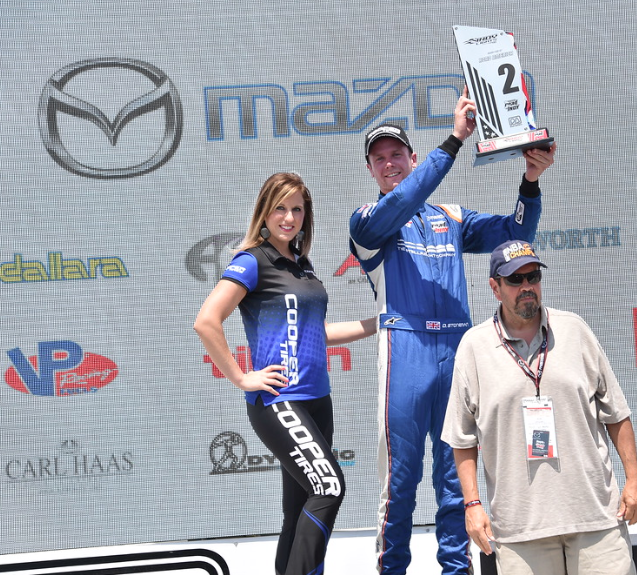 Stoneman, who won the Freedom 100 last month in Indianapolis with a famous victory, made it four podiums in as many races at the long sweeping 4.7 mile Wisconsin despite having suffered a five second penalty.

Starting from 5th, Stoneman made a great start and as early as the first lap was up to 3rd. The racing was competitive and the Southampton driver had to battle hard to hold position through the steep curves of Road America, a circuit similar to the Belgium GP track Spa in so many ways. By lap three Stoneman was battling with his championship rival Ed Jones swapping position for second and the two pushed each other hard.

On lap seven Stoneman was adjudged to have blocked the car behind him and was handed a five second penalty, meaning that the 25 year old had to finish at least five seconds ahead of the fourth placed car to secure another podium and with it vital championship points. But as the race went on Stoneman rose to the challenge and opened up the gap from the third placed car lap upon lap and finished the race over six seconds ahead and so bagging 2nd place despite a series of safety cars, yellow flags and aggressive driving from his nearest championship rivals.

After the race Stoneman was asked about the incident packed 20 laps. “ Well It was certainly lively. I enjoy the racing here it’s fast and competitive. The incident that led to my penalty was unfortunate. I didn’t see Andre come down the outside of me and I have apologised to him. The resulting five-second penalty meant we had to try even harder to build that gap from third. My Andretti team did a great job in helping me with excellent car and strategy to overcome the penalty.” About the championship he commented. “To close the gap is great, we seem to be getting stronger and stronger with each race weekend. There is still a long way to go yet but our confidence is high.”

The result consolidates second place in the series standings and closes the gap to 22 points.