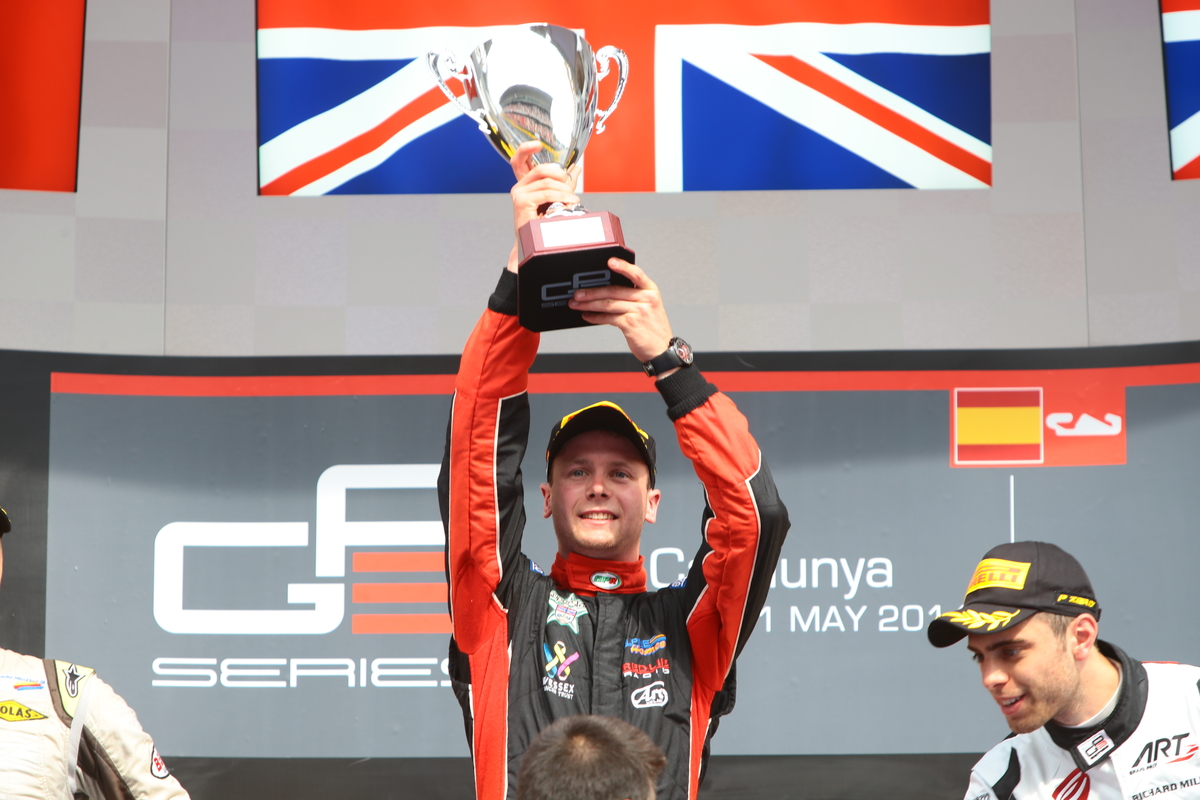 Circuit de Barcelona-Cataluña, Spain, Sunday 11th May 2014. Dean Stoneman produced one the best races of his career in front of F1 bosses to secure an emotional first victory in round 2 of the GP3 Championship.

Starting from the front row of the grid Stoneman made a great start in damp conditions in the F1 Support race at the Spanish Grand Prix circuit by tucking himself just behind the pole sitter. As the rest of the field wrestled with the challenging conditions, the 23-year old eyed up his move for the lead. With the rain starting to fall and the leading car starting to feel the heat of Stoneman’s intentions there was an air of anticipation as the red number 16 Marussia GP3 car changed lines to make his move.

Then, mid way into lap two, Stoneman made his move down the outside of Tuscher. The Swiss driver responded and fought back and with cars side-by-side and wheel-to-wheel the two Dallara’s touched as they exited the complex of corners with the Swiss driver nearly pushing Stoneman off, but the Hampshire driver managed to hold on and establish a lead.

To make things more difficult, Stoneman had to contend with two safety cars due to accidents, which curtailed any opportunity to open up the gap he was so clearly capable of. With a number of leading drivers switching to wet tyres mid way through the 17-lap race, Stoneman managed to trade fastest laps on slick tyres in an impressive display in tricky wet conditions.

The race then was run on a timed basis due to the safety car incidents which triggerd a nervous last ten minutes for Stoneman’s team as they watched the remaining of the thirty minute race elapse. But it was Stoneman who was in control of the race to the end; crossing the line for an emotional victory for the popular Brit.

Stoneman was delighted with his first GP3 win “ This feels amazing. To be back winning on the international stage again so early in the season exceeds all my expectations. The weather made it really tough. There was simply no grip at the start, I even managed spin the car on my out lap. The start was good, I knew I had a chance to get the lead but knew I had to do it early on. I passed him but he came back at me and nearly took us both off. Thankfully I was able to open up a small lead only easing up at the end to preserve the tyres. ”

Stoneman later dedicated his win to his friend Dean Paling who died in a road traffic accident in December last year. “He would have enjoyed this today, so this one’s for him.”

The victory confirmed the return of world class young driver who was forced to take a break from racing in 2011and 2012 to beat life threatening Testicular Cancer.

Stoneman will now prepare for rounds 3&4 of the GP3 Championship as it moves on to The Red Bull Ring in Austria 21/22 June.